Jurgen Klopp opted to leave the Portuguese forward on the bench for the FA Cup semi-final victory over Manchester City, after he picked up a knock in the days leading up to the Wembley trip.

Having rested a number of players for the Champions League win over Benfica last week, Liverpool face another juggling act ahead of two derbies at Anfield that arrive within days of each other.

After United visit on Tuesday, Everton are their next opponents at the weekend before Villarreal head to Merseyside for the first leg of their Champions League semi-final tie.

Therefore Klopp could turn to Joel Matip, Jota, Roberto Firmino or Jordan Henderson after they started the City game on the bench.

The manager said on Monday: “There were some players not in the squad at the weekend and will not be in the squad for tomorrow, even if they are in really good shape.”

Liverpool have no known fresh injury worries to contend with ahead of tonight’s north-west derby clash. 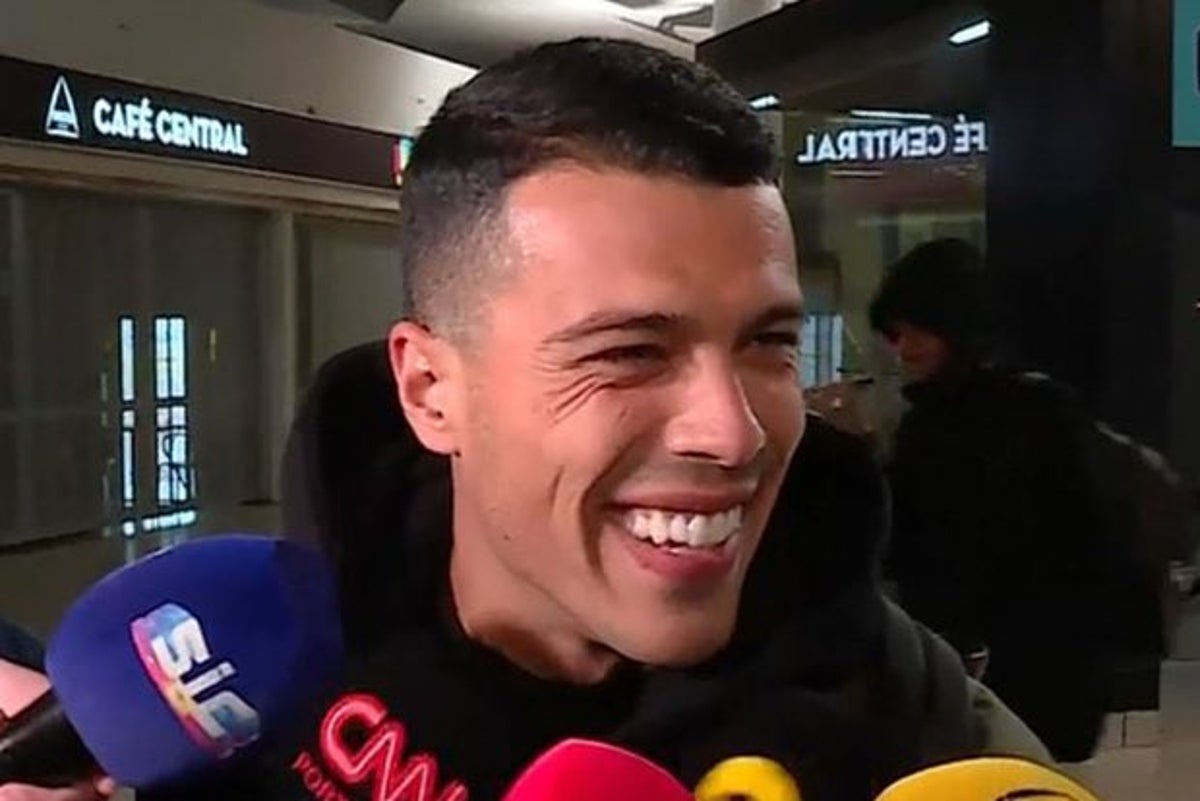 ncoming signing Pedro Porro has spoken publicly for the first time about his move to Tottenham ahead of boarding a plane to London.

Standard Sport understands the right-back will complete a £39million move from Sporting later on Tuesday, the final day of the January transfer window.

The move was thrown into doubt on Monday after Sporting reneged on the deal by asking for more money, despite Porro having said his goodbyes and with a medical in London booked.

Further talks have revived the transfer and Porro, who was absent from training and understood to be distraught by the hold ups, will now finalise the move on Deadline Day. He spoke to reporters at Lisbon airport on Monday evening.

He told CMTV: “I’m grateful to Sporting, I love the club.

“I didn’t train as I was only focused on the transfer to Spurs but I will always be thankful to the club.”

Porro is expected at Hotspur Way on Monday evening, where he will stay overnight before becoming a Spurs player on Tuesday.

The Londoners made it back-to-back wins after beating Everton 2-0 to climb out of the Premier League’s bottom three nine days go and rarely needed to hit top gear as they halted League One side Derby’s 19-game unbeaten run.

West Ham boss Moyes now faces a reunion with former side Man Utd at Old Trafford in the last 16 after being drawn to face the Red Devils in the draw just before Monday night’s routine win at Pride Park. The match will take place in the week commencing February 27.

How West Ham eased past Derby

Paul Warne’s side are flying high in fourth place in the third tier and there were high hopes of an upset among the home faithful before kick-off in a Pride Park crowd of 25,308.

Bowen shot tamely at Derby goalkeeper Joe Wildsmith soon after, but was not so wasteful in the 10th minute.

Derby’s best move of the half saw James Collins volley just off target after Barkhuizen had run on to Craig Forsyth’s dinked pass to pick out the Derby striker with a fine cross.

Barkhuizen and Nathaniel Mendez-Laing offered Derby’s best hopes of getting back on level terms before the break, but they had no shots on target in the first period.

The good news for Rams fans at the break was their side were still in the tie against a top-flight side who were not at their best.

But five minutes into the second period the home side fell 2-0 behind. Derby skipper Curtis Davies’ sliced clearance span into Bowen’s path down the right and his cross was headed in at the far post by Antonio after deflecting off Forsyth.

Haydon Roberts was an inch away from connecting fully with Dobbin’s excellent cross, but the Rams were soon back-pedalling again.

Bowen was denied in quick succession by Wildsmith’s point-blank save and Cashin’s last-ditch tackle before Ben Johnson’s angled drive was kept out by the Derby goalkeeper.

The Rams were full of endeavour until the final whistle and Dobbin was close to being rewarded for an impressive cameo display when shooting straight at Alphonse Areola, but on the night County could not bridge the gulf in class.

Bowen: You’ve got to beat the best to win the cup

Jarrod Bowen said “to be the best you’ve got to beat the best” after West Ham were drawn to face United in the fifth round.

“I found out (about the draw) on the bench. We’ve got Man Utd away so listen it’s never easy and if we want to be successful in these competitions we’ve got to beat the best teams,” Bowen told ITV Sport.

“With respect to Man United they’re a top top team but we’ve been there plenty of times before and you’ve got to beat the best to be the best.”

Bowen added: “It was nice to score against Everton and tonight as well. I think the situation that we’re in, any sort of confidence from any player…

“The last two to be involved with was very good for me but I think for us, two wins on the bounce as well, two good results for us and it’s all about momentum in this game and I think we can use this going forward.”

Warne: We can’t knock the lads

Derby manager Paul Warne told ITV Sport: “In fairness West Ham played a professional performance, at times I thought we went toe-to-toe but I don’t think we did enough to score unfortunately.

“We can’t knock the lads tonight, we asked them to be the best versions of themselves against a Premier League team so not bad.

“But we probably didn’t have enough graft in the final third but I can’t really knock them and we know West Ham haven’t got an easy draw next but I wish them a sincere good luck.

“I thought the lads gave a good account of themselves at times and at times they were punching.”

West Ham’s next game is away to Newcastle in the Premier League on Saturday, live on Sky Sports; kick-off 5.30pm.


Marlin Briscoe is smiling in heaven. Doug Williams probably has a huge grin on his face. The first Black starting quarterback in NFL history — Briscoe — and the first Black quarterback to start and win Super Bowl MVP — Williams — are the giants whose shoulders Kansas City’s Patrick Mahomes and Philadelphia’s Jalen Hurts are standing on. And between Rihanna’s halftime performance and the fact that we’re about to watch history made as two Black quarterbacks take center stage in sports’ biggest game — you could make the case that it’s destiny, given that it will all take place during Black History Month.

But, don’t let this moment distract you from the fact that Black coaches are still getting a raw deal at a time in which Black quarterbacks are being elevated like never before. Two things can be true at once, this is why this moment is such a joyous, yet infuriating one.

Sixteen years after we watched Lovie Smith and Tony Dungy make history as the first two Black head coaches to appear in the Super Bowl, we’re watching Mahomes and Hurts do it for Black quarterbacks. But since that February day in 2007, things for Black coaches have seemed to fall apart as they’ve improved for Black quarterbacks.

Eleven Black quarterbacks started Week 1. Now compare that to the three Black coaches who had jobs when the season began — Mike McDaniel doesn’t count, as he chooses to identify as a human being with a Black dad.

When Lovie Smith got fired in Houston, three became two. And as we wait for the remaining hires to be made, there isn’t a track record or feeling that anything will be done in the next few weeks to greatly improve these dismal numbers. We’re at a point in which the league, the owners, and fans are fine with having a Black man be their quarterback — but not their coach.

Progress on the field, not on the sidelines

This type of progress isn’t something we’ve seen with Black coaches, though. At roughly this point last year, there were only two Black head coaches in the league — Mike Tomlin in Pittsburgh and David Culley in Houston. As we know, Culley would get fired after one season by the Texans and would get replaced by Smith, another Black coach that would be fired after a lone year on the job. Brian Flores’ class-action lawsuit (which was joined by Ray Horton and Steve Wilks) is still hovering over the league. But, you wouldn’t know it the way that Wilks wasn’t able to keep his interim tag — which is a death sentence for Black coaches — with the Carolina Panthers despite doing a wonderful job.

In 2000, Dennis Green (Minnesota) and Dungy (Tampa) were the only two Black full-time head coaches in the NFL. Twenty-three years later, we’re in the same place, but worse. The XFL is just weeks away from rebooting and their eight-team league already has four Black head coaches. It’s a jarring stat that embodies just how big this problem is, despite what Todd Bowles thinks.

“I think the minute you guys stop making a big deal about it, everybody else will as well,” one of the two Black coaches in the league had the audacity to say earlier in the season.

In less than two weeks, a league that’s majority Black will make history when two Black quarterbacks play in a game that will feature entertainment before the game and during halftime from Black performers in a month that’s dedicated to recognizing the contributions to what Black people have made to this country. It will be a joyous occasion.

However, while you’re enjoying the game, I beg of you to ask one question to the company you’ll keep on that day. “If the NFL, America and the world can accept all this Blackness, then why won’t they accept Black coaches?” And while you’re waiting for people to answer that question, realize that “End Racism” was etched on the field all season.