It might be time to stop bringing grandpa around the kids. Well, I don’t know if John Stockton is technically a grandfather yet, he’s just spouting conspiracy theories and claiming to have evidence of things that didn’t happen — again.

A recurring character in our IDIOT OF THE MONTH segment — he made the 2021 IDIOT OF THE YEAR list, as well — the former Jazz point guard is sure to make another appearance in March’s edition. He’s nearing the point where he deserves his own Idiots spinoff House of Dragons-style.

In an interview with the Spokesman-Review, the Gonzaga alum said a number of things that will make your brain bleed. He said he just wants to mind his own business, watch the Zags, go home and talk about the games. He said he’s really impressed by Aaron Rodgers finding the courage to come out against the vaccine and “make those statements for the people that are less fortunate than him.” He said he doesn’t have a platform because he doesn’t have any social media. That’s after he said he understands he’s a public figure.

Those are the opposite of galaxy brain takes; they’re like a neighborhood take or something infinitely more myopic than “galaxy.”

And, he said this:

Holy fuck! Nearly 150 athletes drop dead in the middle of games like an episode of The Leftovers or an M Night Shyamalan movie. How that hell isn’t this a bigger story? And why am I writing about Stockton as opposed to investigating the list of dead athletes he claims to have in his unvaxed hands?

Well, first off, his claim is false, and also he’s a certified loon.

If you dive into his sources, which I did for research and comedic purposes, you quickly find that he cites a foundation that cites a research group that cites a bootleg VAERS site. VAERS is short for Vaccine Adverse Events Reporting System, and the real version is an actual government site where you can report a bad reaction to any number of vaccines.

However, in the disclaimer, which people love to skip over, it says, “Most reports to VAERS are voluntary, which means they are subject to biases. This creates specific limitations on how the data can be used scientifically. Data from VAERS reports should always be interpreted with these limitations in mind.”

The source Stockton called “a wonderful site, it’s triple-checked, it’s peer-reviewed, they’re brilliant people with all the credentials both medical and nonmedical that you could ever want” was picked apart by a guy with a laptop and a knowledge of how Google works in less than 15 minutes.

Next up he’s going to tell me Tru TV’s Lizard Luck Towing is an accurate depiction of the repo game. I know the Spokesman-Review doesn’t have a lot of famous former athletes to interview until Domantas Sabonis retires to the Pacific Northwest, but fuck, maybe see what Adam Morrison is up to. (If you guessed “hosting a podcast,” congrats, you’re a genius, and Captain Obvious will contact you regarding your prize soon.)

I understand it’s an exclusive interview because Stockton has been holed up since he made an appearance on an anti-vax home video saying equally wild shit. However, just because it’s exclusive doesn’t mean it’s worth printing. It’s not quite as dangerous as Eddie Brock interviewing serial killer Cletus Kasady in the new Venom movie, but it is just as desperate. (Carnage kills people a lot quicker than COVID.)

I haven’t a clue as to what Stockton was trying to accomplish in this interview because he’s certainly not getting his season tickets back anytime soon after those quotes. If he really wants to go to Zags games that badly, I have a solution. It comes in a vial. You inject it in your arm, it protects you and those around you from a deadly disease, and it definitely isn’t killing athletes at random.

Miami Heat are a throwback to Pat Riley’s Knicks Birmingham City caused an upset in the Women’s League Cup by beating top-tier Brighton in the first round.

Libby Smith scored the opener before Jade Pennock then made it two shortly after the break.

Brighton pulled a goal back through Lee Geum-Min but Lucy Quinn extended Birmingham’s lead once again.

Danielle Carter added an 89th-minute penalty but it proved to be only a consultation as the Championship side picked up the three points.

West Ham had looked on course for defeat but a last-minute equaliser from Dagny Brynjarsdottir spared their blushes and salvaged a draw.

And after the 2-2 draw, the Hammers secured an additional point with a 10-9 penalty shootout win.

Wins for Spurs and Liverpool

In an all-WSL affair, Tottenham beat Reading 2-1 thanks to goals from Ashleigh Neville and Nikola Karczewska.

Durham and Sheffield United shared the spoils after a thrilling 3-3 draw with Durham picking up the additional point, winning the penalty shootout.

Cardinals’ J.J. Watt plans to play just days after having his heart shocked back into rhythm


Arizona Cardinals’ defensive end J.J. Watt posted an alarming Tweet Sunday morning just hours before kickoff of the team’s game on the east coast against the Carolina Panthers. Watt stated that some news about him had been leaked and was going to be reported today. Immediately, most who caught this tweet were probably racking their brains and thinking, ok, what happened? From there, Watt went on to explain the following.

“I went into A-Fib on Wednesday, had my heart shocked back into rhythm on Thursday, and I’m playing today. That’s it.”

Wow! I don’t think anyone expected to hear that about Watt. Everyone is relieved that Watt is out of the hospital and seemingly “alright,” but the fact that he plans to play in this game today only four days after having his heart shocked back into rhythm is scary.

If the Cardinals won’t do it, someone from the league office or the NFLPA needs to step in and force him to sit this game out. After what we’ve seen in the past week, with Tua Tagovailoa suffering two concussions in less than five days, Watt needs to be held out of Arizona’s game today.

No, Watt didn’t sustain an injury to his head, but his heart was shocked so it would work properly. Even if Watt was cleared by his own independent doctor, precautions should be taken just in case. Yes, it’s football, we know that, and everybody is tough. You have to be tough to make it in the NFL, but these players also need protection from themselves regarding their health. It doesn’t matter if atrial fibrillation isn’t “considered” too serious. Take extra precautionary measures and be careful.

Last week, during coverage of the Tua incidents, multiple former NFL players were asked about head injuries along with others and if they’d ever lied to get back into a game. The answer was a resounding YES. Former Patriots and Chargers All-Pro safety Rodney Harrison went on Dan Patrick’s show and admitted to lying about head injuries and others. Harrison says he lied every time he had an injury to continue playing.

Patrick also told a story about Steelers legend Hines Ward grabbing his ankle after getting his “bell rung” because he didn’t want to come out of a game. It doesn’t matter if it’s the head or the heart. If it involves either, that player should be further evaluated and forced to sit out a game. We can’t continue to gamble with these guys’ lives.

If Watt ends up playing at 4:05 p.m., it could be the biggest story of the day on the heels of what happened with Tagovailoa over the last week. Left up to them, NFL players will choose to play virtually every time. The league doesn’t want bad PR, yet they continue to invite it at every turn.

The NFL is too concerned about trivial matters like players celebrating or not wearing the “correct” socks. The league fined Lions running back Jamaal Williams for a touchdown dance last week that may have been a little too provocative for their liking. A player can be put in harm’s way after clearly looking concussed and allowed to play a few days later, but heavens forbid a black player offends their audience by swiveling his hips after scoring, à la Ravishing Rick Rude. The NFL needs to be more concerned with the well-being of its players and protecting them as they claim.

Hopefully, someone steps in and talks some sense into Watt or takes the decision out of his hands. 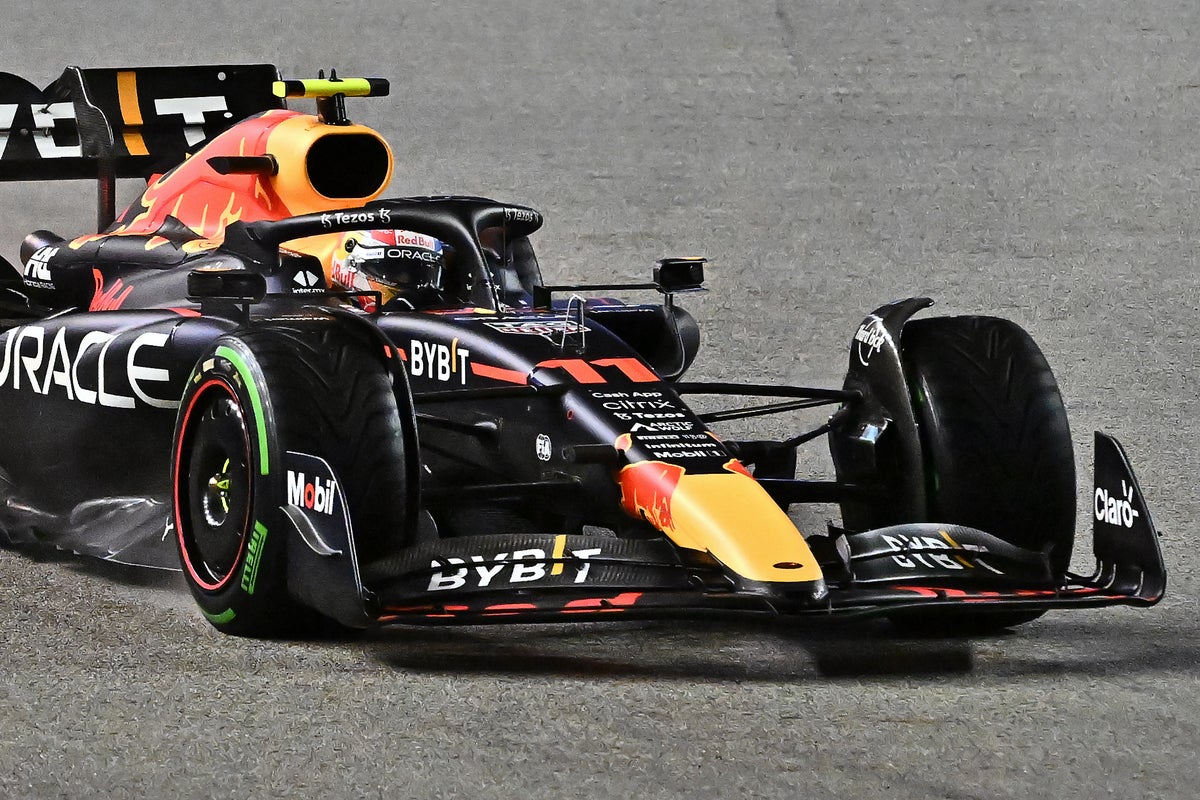 A heavy downpour 30 minutes before the scheduled start time led to an hour-long delay and the first wet start in Singapore since 2017 – when a first corner crash wiped out a Red Bull and two Ferraris, including title contender Sebastian Vettel.

There was no such flying debris at the start this time around but still drama aplenty as Perez leapt past pole-sitter Charles Leclerc and Lewis Hamilton lost out to Carlos Sainz for third.

Verstappen, starting eighth, found himself bogged down off the line and had only recovered to ninth when a safety car was required on lap eight.

Nicholas Latifi, recently confirmed to not be staying in F1 next season, squeezed Guanyu Zhou, who is, into the wall at Turn 5 and both were forced to retire.

Verstappen was quickly up to seventh at the restart before Fernando Alonso, in his record-breaking 350th start, put up stout resistance for his next overtake.

Alas, the Spanish veteran’s Alpine could not match its driver’s longevity and his engine blew on lap 21. A string of virtual safety cars was then began with Alex Albon hitting the wall shortly after the green flag and Esteban Ocon’s engine popping once racing had resumed once more.

The prime time to swap to slick tyres began to dominate thinking as the second hour began on the two-hour limit, with 61 laps a far too ambitious total (perhaps even in the dry).

Hamilton, pushing Sainz for third, came in too hot at Turn 7 and headed straight into the barrier. Fortunately for the Brit, the damage was merely a broken front wing and he clambered out between the sparring Lando Norris and Verstappen.

Moments later, the trigger was pulled by the remaining cars (George Russell aside, who while struggling from a pit-lane start leapt for slicks far too early) and Hamilton was left in ninth place.

Yuki Tsunoda became the sixth retiree after sticking his AlphaTauri in the barrier fresh on Medium tyres, prompting a second full safety car and the fifth interruption to an already-delayed race.

Verstappen, who could have won the title in Singapore had a series of events gone drastically different, locked up lunging at Norris for fourth place and darted down the escape road. Having to pit, he was last for a brief moment before Russell suffered a puncture when giving Mick Schumacher a bump as he overtook the German.

Finally, with half an hour to go, a proper race for the lead broke out. Now on slicks, Leclerc dragged Perez into his crosshairs.

Singapore’s propensity for being a tough circuit to overtake at helped the Mexican survive an onslaught from the Ferrari but Leclerc began to make errors and Perez broke DRS to build out a comfortable lead.

Red Bull came into the weekend with some hope of crowning Verstappen as champion at the chequered flag but it instead heralded a second win of the season for Perez, with a lowly finish of seventh for the championship leader reducing his chances of getting the job done in Japan next week, too.